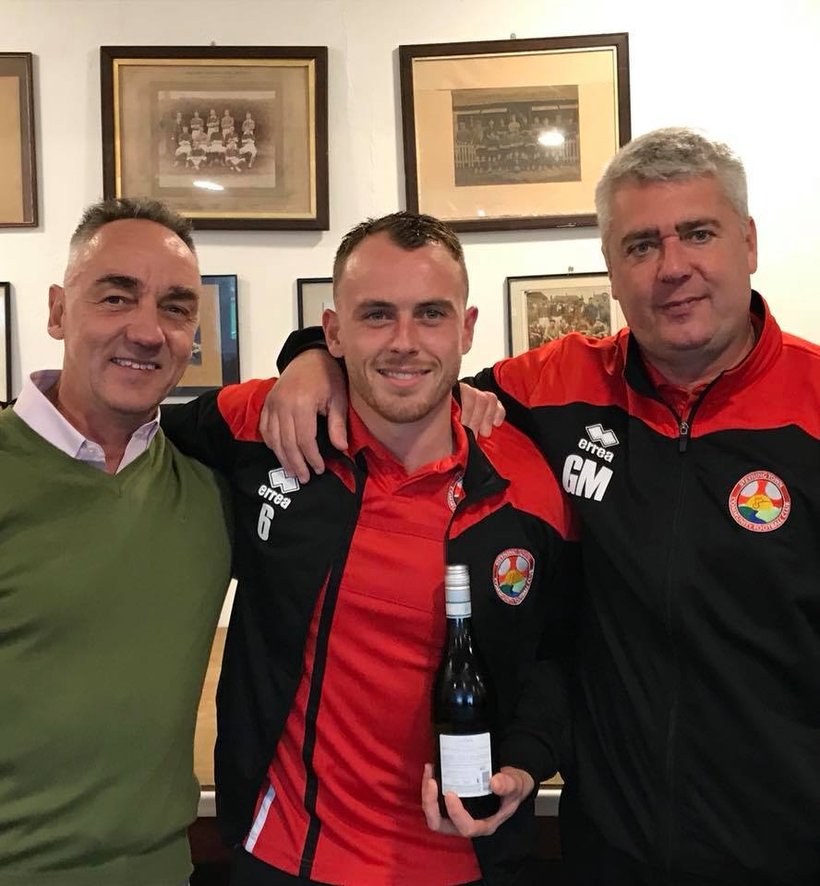 Town’s impressive up turn in form continued on Saturday with a 2-1 win over Langney Wanderers.

It was a weather dominated match as a wind swept and rain lashed Shooting Field saw the arrival of hurricane Brian for the afternoon.

From the side that won at Oakwood during the week, Tom Betts came in ‘between the sticks’ for the absent Ben Rose with Joe Bartlett also in at right back for Rob Clark who dropped to the bench.

We started the match playing 5 across the back, playing into the jaws of Storm Brian and it was our visitors who applied all the early pressure with Tom Betts saving well at point blank from Langney front man Rhys White and minutes later veteran striker Paul Rogers hit our woodwork with a good effort. We struggled to get our foot on the ball during these early stages and many of the Langneys chances came through our own mistakes as we continued to play out from the back to counter the strong wind.

We got into the game though, coping well with the conditions, and after Alex Townley and Scott Faber went close to scoring on 20 minutes that man Ben Bacon popped up to bag his 25th goal of the season to give us the lead prodding home from a Gainsford header from a corner on right. 1-0 Town.

Our visitors were not deterred by the set back and continued to make full use of their wind advantage and on 40 minutes they deservedly pulled level, all be it with a soft goal.

Rhys White hit a ‘pot shot’ effort from outside our box that caught the wind and bobbled awkwardly wide of Betts for 1-1.

We may though have still gone in at half time a goal to the good when just before the break a great shot from Faber came crashing down off the Langney cross bar barely an inch in front of their goal line.
Half time 1-1

The second half commenced with the strong wind this time at our backs but with both sides looking threatening, Betts doing well early on in again keeping out White and Rogers.

However, we had the lion’s share of the possession and indeed the chances; Townley, Lewis Levoi and Tom Gannon all going close with good attempts and Faber again striking the Langney woodwork from a free kick.

Roared on by a decent crowd it was looking like the breakthrough our second half performance deserved would not come, however on 81 minutes we finally got our reward when Bacon and Levoi combined for Bacon to play in Craig Knowles to calmly net from close range for 2-1 Town.

Before the whistle the influential Townley and hardworking Levoi both went close again when through one on one, but Knowles’s late strike proved to be enough.

Yes, another good win and against a decent high placed side making it three wins on the spin and putting us in a very healthy 5th place in the Div One table. Seven wins from eleven in the league, well done one and all.

This also stands us in good stead for next Saturday’s big test away to leaders Little Common. Please note the venue for this fixture is the Oval, home of Eastbourne United FC. Little Common’s first team our playing all their home fixtures there this season (KO at the Oval next Saturday – 3pm). Away support as always would be much appreciated.
Final score – Steyning Town 2 Langney Wanderers 1