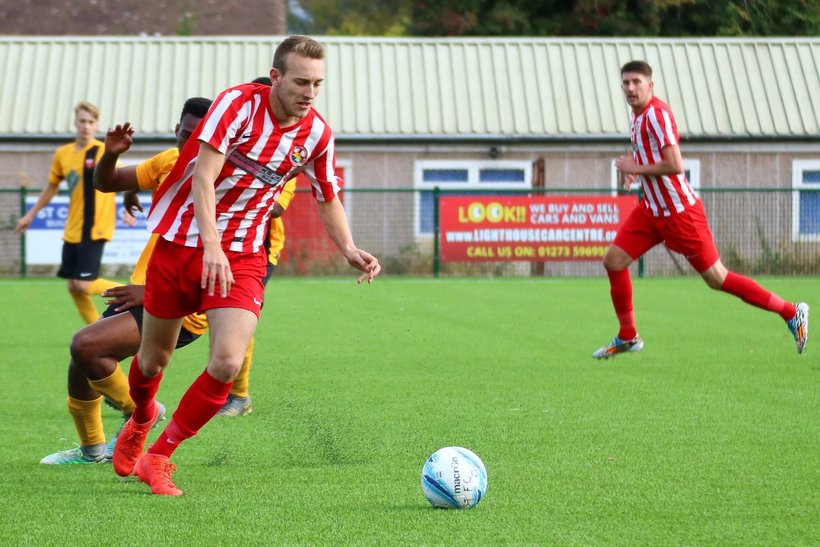 Town’s recent winning run came to an end on Saturday with a rather harsh 1-0 defeat away to league leaders Little Common.

On a bright and sunny afternoon at the Oval, home of Eastbourne United FC (Common’s home ground for this season) we lined up with five team changes from the side that beat Langney the previous week. Ben Rose returned ‘between the sticks’ with Tom Betts moving to the bench; absent for various reasons were Joe Bartlett, Tom Pickford, Scott Faber and Lewis Levoi with Joe Fitzpatrick, Rob Clark, Dan Thompson and Ollie Hartley coming back into the starting eleven.

Despite a strong and spirited Town performance, a solitary 56th minute goal from Common front man Jamie Crone was enough to secure all three points for the current table toppers.

For much of the game it has to said we were clearly the better side, edging the possession and creating more chances against a home side who at times looked a little off color and lack lustre, however Common showed why they are currently top of the league by grinding out a result when possibly not at their best.

We were unlucky not to go in at the break at least a goal to the good, Dan Gainsford, Alex Townley and Ollie Hartley all going close with plenty of industry from Craig Knowles and Ben Bacon. However we went in at half time definitely the more galvanized side. On a negative though, near the break we lost Dan Thompson due to injury, replaced by Callum Court.

We started the second half applying the pressure again and early on Rob Clark hit their side netting with a good attempt after a neat flick on by Gainsford. Even after we went behind we kept our shape and discipline and continued to press with Bacon going very close to equalizing on two occasions.

However, towards the end of the match we flagged a little in the final third and at this time if we’d done a little more with what we had there we would surely have come away with something to show for our hard work.

Yes, a strong performance against the top side and we have definitely played worse this season and won. We must focus on and carry the positives. Hard luck lads( on Halloween weekend you certainly gave the league leaders a few frights!).